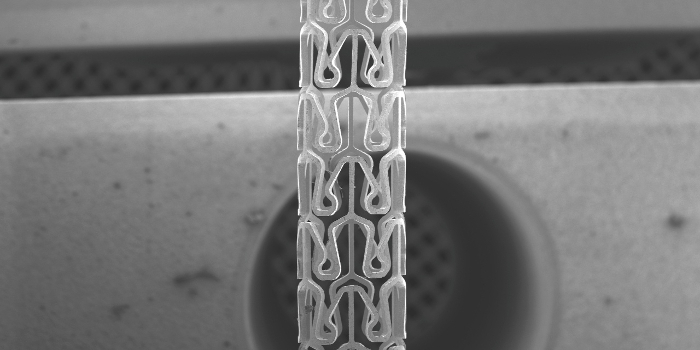 A supplier of laser cutting and welding systems and services, Precision Automated Laser Systems Inc. (P.A.L.S.), San Clemente, CA, began when one of the first companies to produce stent cutting systems closed their doors, and two of its former employees started a company to produce glove-box welding systems for the medical device industry.

When former tube-cutting customers asked for a new system specifically designed to f ll their needs, P.A.L.S. introduced one of the first turnkey fiber laser systems to the market that improved the production of small metal parts over traditional machine tools and lamp-pumped lasers.

In the 18 years that P.A.L.S. has been integrating laser systems, the preferred laser source for welding or cutting small to medium-sized metal components has changed, allowing laser technologies to further assist in medical device development and production in new ways and opening the doors for more users and integrators.

In the early days, metal cutting applications were dominated by either f ash-lamp-pumped Nd:YAG or gas laser sources. With current fiber laser technology, the use of lasers for metals applications is easier, more efficient, and cost effective than ever with other benefits that are substantial. For the user, there is improved performance, the ability to produce features and products that were beyond the older laser’s capabilities, easier use, minimal maintenance, and a lower cost.

For system users new to the technology, a fiber laser is ideal: the learning curve for using a fiber laser integrated by a qualified laser integrator is minimal. Moreover, without any lamps to change, optics to align, or filters or other consumables to be concerned with, most users can fully operate the system in a few days.

For the laser system user, the benefits include: no flash lamps changes, optics to align, minimal operator training, simplicity of use, enhanced operator safety, nonexistent maintenance, and no consumables. A fiber laser is an excellent upgrade at a very low cost for current users of lamp-pumped lasers for thin metal applications. For P.A.L.S. as a system integrator, these benefits are very important, especially when working with overseas clients and those with minimal laser experience.

Laser processing in the medical device field has seen procedures to produce eversmaller components and assemblies, and lasers have been the driving force in the process. Now, fiber lasers are leading the way.

Some of the major applications for lasers, in this field, are the cutting of tubing and flat stock for implantable devices. For tube cutting, the fiber laser is an easy choice because it produces smaller beam profiles and uniform beam characteristics, significantly higher flexibility in parameter settings and pulse shaping capability that results in finer kerf sizes that in turn produce less dross deposited on the material cut, which in turn allows smaller, more precise features and denser cut patterns. This also benefits the part designer by allowing greater flexibility in design capabilities that can be produced.

New users, when introduced to fiber laser technology, are surprised by the ease of use and simplicity of operation. When approached by a client that wanted to cut features in 0.012 in. diameter tubing, the P.A.L.S. fiber laser tube cutting system was the only laser system that produced acceptable parts.

The fiber laser has penetrated into new and different industries and applications. A number of recently produced systems, while designed for medical device applications, have been integrated for applications unrelated to core medical device customers. For example, one recent client wanted to cut stainless steel strips varying in width from 0.25 to 1.0 in. to replace a stamping operation. Working with the customer on the system requirements, P.A.L.S. designed and built a prototype system that immediately went into full production and has been running at a 24/6 weekly schedule for more than two years with 0% downtime.

Users also benefit from reduced facilities requirements such as lower power consumption and smaller floor-space requirements for their system. Many systems can run on wall outlet power because fiber lasers are up to 10 times more energy-efficient than traditional laser sources, dramatically reducing production-facility running costs. The option of air cooling means the installation need not overload on-site air conditioning. Additional savings are realized through the use of laser diode pumping at high conversion rates, delivering wall-plug efficiencies of more than 25%. With such low requirements and size, a system could be run in almost any office or warehouse.

Research and development facilities are integrating fiber lasers and systems for furthering innovation in the growing applications that can be produced by lasers. A recent system designed and integrated by P.A.L.S. was installed at Bogaczi University in Turkey for students to apply their schooling on real-world applications. This introduction of lasers and their uses may have not been attempted without the ease of use, safety, and minimal technical skill required to operate and maintain a system that fiber lasers can provide.

The fiber laser source will continue to open new areas and revitalize familiar ones as the technology is absorbed into the marketplace.